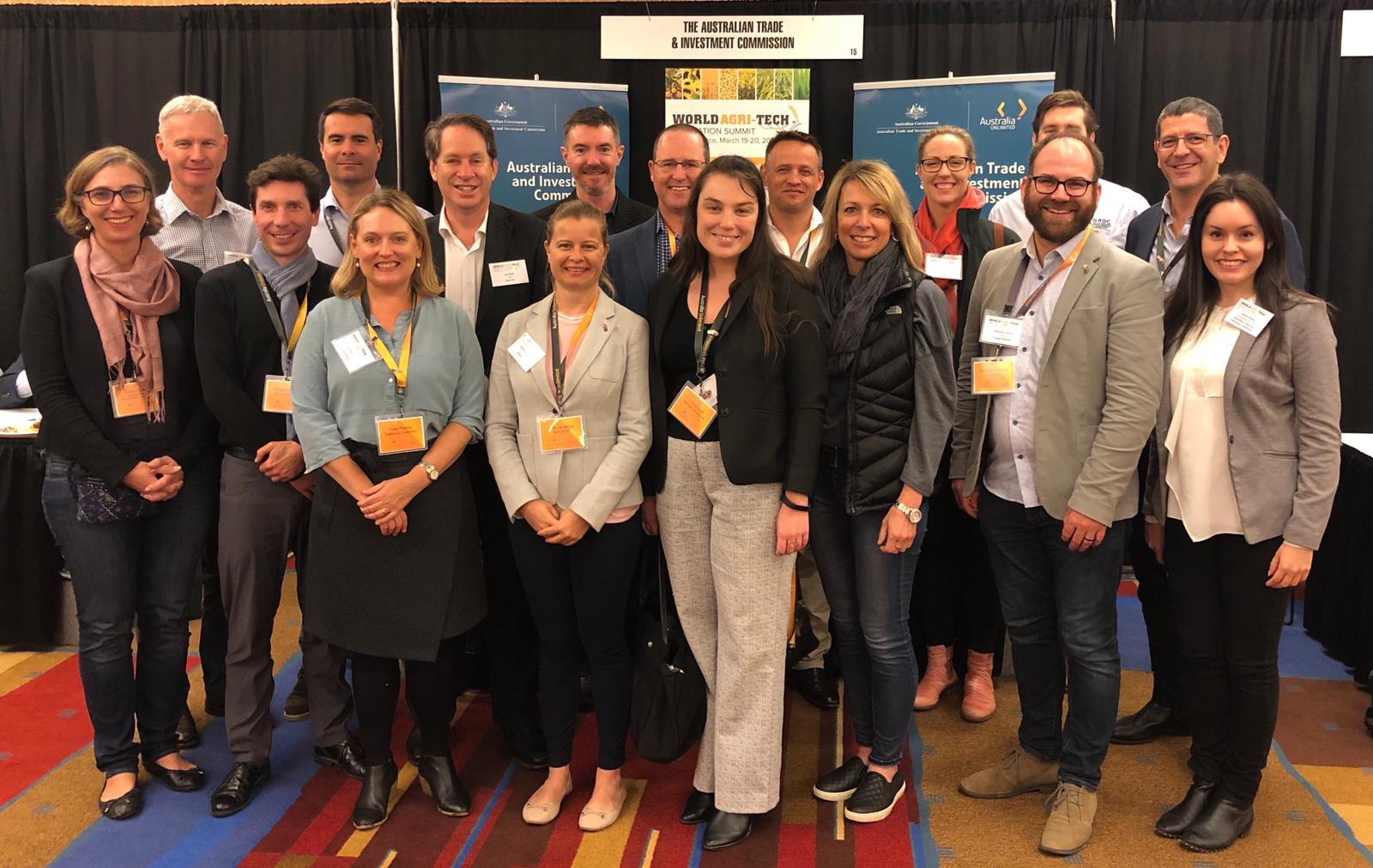 With the end of the year nearing, we thought it was time to review all the things we have learned from our travels and interactions with our clients, farmers and experts in different areas of agriculture.

This week we will start with a report about the trip to the World Agritech summit in San Francisco earlier this year where our CEO and co-founder Dr Sofie De Meyer, joined the March 2019 Austrade USA mission. Together with Agersens, AgriFutures Australia, Aware Water Group, Bridge Hub, Digital Ag Collective, Escavox, Farmbot Australia, Farmscan Ag, FluroSat, GRDC, Monash University, Nexgen Plants, ProAgni, thingc and UTAS, MALDI-ID was immersed in the agricultural industry in the US to learn about its different aspects.

The information-packed program started with an overview of the Austrade USA landing pad assisting in understanding on how to conduct business in the US. We had the opportunity of talking to Australian businesses with successful trading histories in the US and gained particular insights into the relevant cultural differences between the US and Australia.

After this insightful introduction, we fully embraced the opportunity to engage and learn about innovative technologies during the World Agri-tech summit in San Francisco. The summit included a vast array of great speakers and interesting discussion points on a wide range of topics regarding the future of agriculture worldwide.

It is becoming apparent that a tailored approach to farming is quickly becoming more prevalent with the inclusion of various sensors, satellite data, robotics, precision sowing/spraying/harvesting and Artificial Intelligence amongst other things. A truly smart farm might be closer to reality than we think as global players like Amazon, IBM, Bayer and Corteva show a strong interested and have started to invest in the sector.

While we embrace this new age of data-driven agriculture, we fully agree with Abe Hughes from Trimble who mentioned that “At the end of the day, none of this technology means anything unless it shows a true Return On Investment” and this is going to be one of the major challenges for farmers in the near future. It will be important to understand how they will be able to integrate the technology that suits their needs instead of just jumping on board with what is often referred to as the latest and greatest new tech.

A little closer to our own interest were signs of a renewed focus on soil health and attention to minimising soil degradation of arable land. After focusing on everything above ground for the past few decades to increase performance of livestock and crops, the major industry players are refocussing on the soil to increase production to feed a growing world population. This was evident by the large number of “biologicals” on offer. These products from Micro-organisms come in a wide range of applications from enhanced nutrient uptake to plant growth promotion and pest/disease control. A highly important aspect for the success of these, however, will be the quality and appropriate application of these living organisms to provide farmers with the return on investment. With the fast and accurate identification of microorganisms a core aspect of our business, quality assurance is exactly what MALDI-ID can offer to manufacturers providing a great opportunity for us in the future. Supporting the manufacturers will help to insure that investments by farmers locally and internationally will result in that “Return on Investment”.

After an information packed first week, we left the San Francisco Bay area to explore the Salinas valley, getting to know successful local farmers and learn from their experience.

The Valley in Monterey county California, is cradled by mountains to the east and west, yet opens to the Pacific Ocean in the north which cools the valley. Together with great soil it is a highly productive growing region which has earned it the name of the Salad Bowl of the World due to its large production output serving the majority of the US lettuce market. Valued at of over $1.9 billion, this region is the fourth highest agricultural producing area in California. Around 600,000 ha of land is used for agriculture of which more than 80,000 ha are irrigated. As the name suggests, there is a strong horticultural focus in the north on cool-season vegetables like artichoke, broccoli, cauliflower, celery, Asian vegetables, spinach and lettuce. Further south where the effect of the cool pacific climate is less pronounced, warm-season vegetables including carrots, peppers, potatoes, and tomatoes are grown. On the sweeter side of things, the Salinas valley is also producing a third of the Californian strawberries and has a thriving viticulture industry.

The week-long road trip started at the Western Growers Centre for Innovation and Technology. Of course, the idea of co-working space is not new, but the implementation and the focus on innovation in the Agricultural industry was very inspiring. The centre does far more than just providing an office space and meeting rooms for potential start-ups and companies. It was created to help identify industry priorities and then assist to address them by attracting small businesses with novel technologies, facilitate testing and networking to meet the needs of the industry. It was great to see how differently things can be approached and how a supportive industry is tackling their problems together to the benefit of everyone involved.

Making our way along the valley, we were introduced to Andy Boy who contrary to his name can look back at an eventful long life during which he developed and established the amazing fresh produce cooler pipeline that he was proud to show us in person. The benefits for the manufacturer and ultimately the customers are clearly evident, observing the short processing time from field through the cooling stages to loading the trucks. 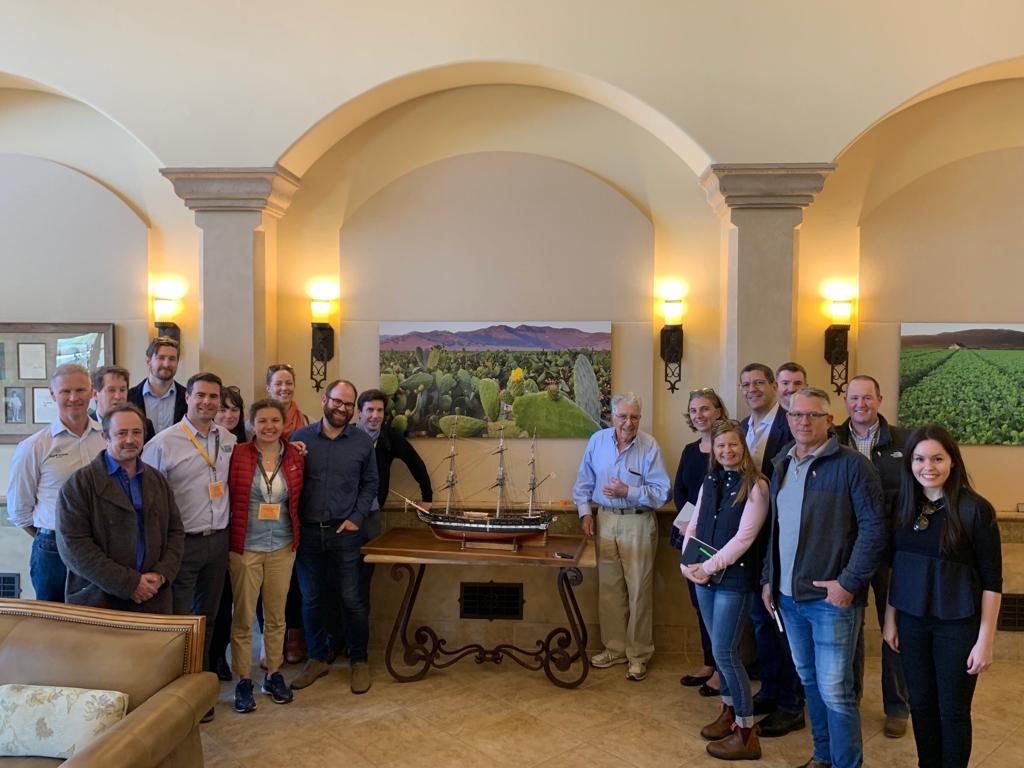 One aspect that became clear visiting Pessagno winery, Sundance Berry Farms, PlantTape and Church Brothers Farms was that the main problem across the region is the difficulty of finding reliable labour, as a large portion of the production still requires manual sowing, weeding and harvesting. Once more innovation plays a big role to improve capacities when staff numbers are limited and PlantTape is a great example implementing  such innovation and working a treat on farm. Check out the video here.

Exploring innovations and how they can help the farmers and benefit the customers was a key aspect of the trip. At Sundance Berry farm they produce both conventionally and organically grown strawberries and Jackie Vasquez proudly told us how they innovated the growing of their organic fruit which resulted in larger good-looking strawberries. When these however hit the market, complaints were soon made on social media that these could not be organic strawberries as they were too big or did not look organic enough. So, innovation is great but what if the customer does not (yet) want it? Therefore, market pressure and how consumers drive innovation and production on farms was another eye opener for all of us. 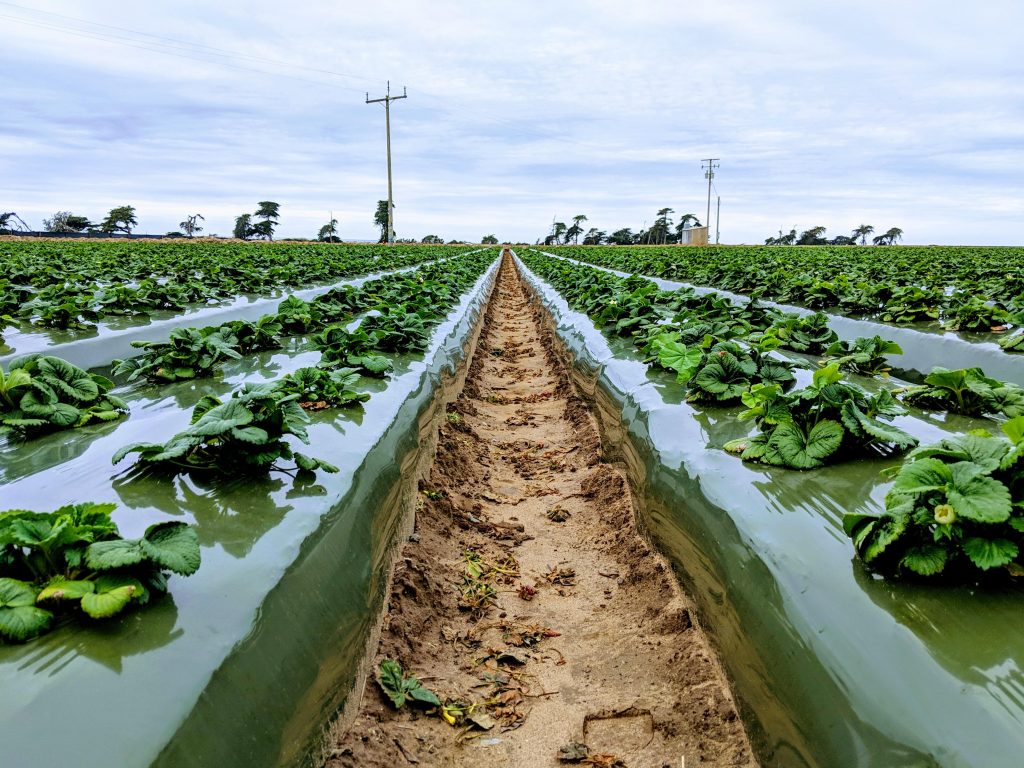 After the great introduction to the horticulture in California we headed east for a better understanding of broad acre cropping in the US for which the Midwest is known globally. Our first stop was St Louis (Missouri) visiting the former Monsanto campus now operated by Bayer Crop Sciences. A tour of the facilities highlighted the latest and greatest in greenhouse technology and gave us an overview of the future directions they have chosen as a global player in the industry. 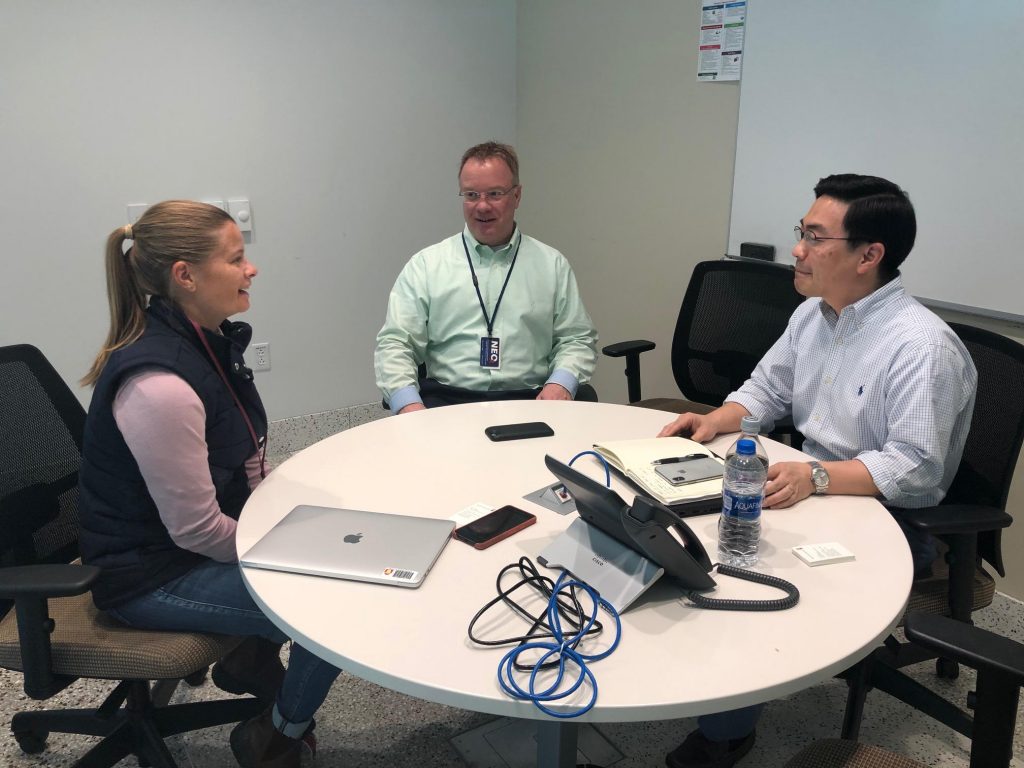 Moving from one of the largest established ag-bio companies to the start-up scene, where the Danforth Plant Science Center and the Helix Biotech Incubator demonstrated how important pathways of innovation are for establishing successful start-ups, providing general and specific support including the building of networks. 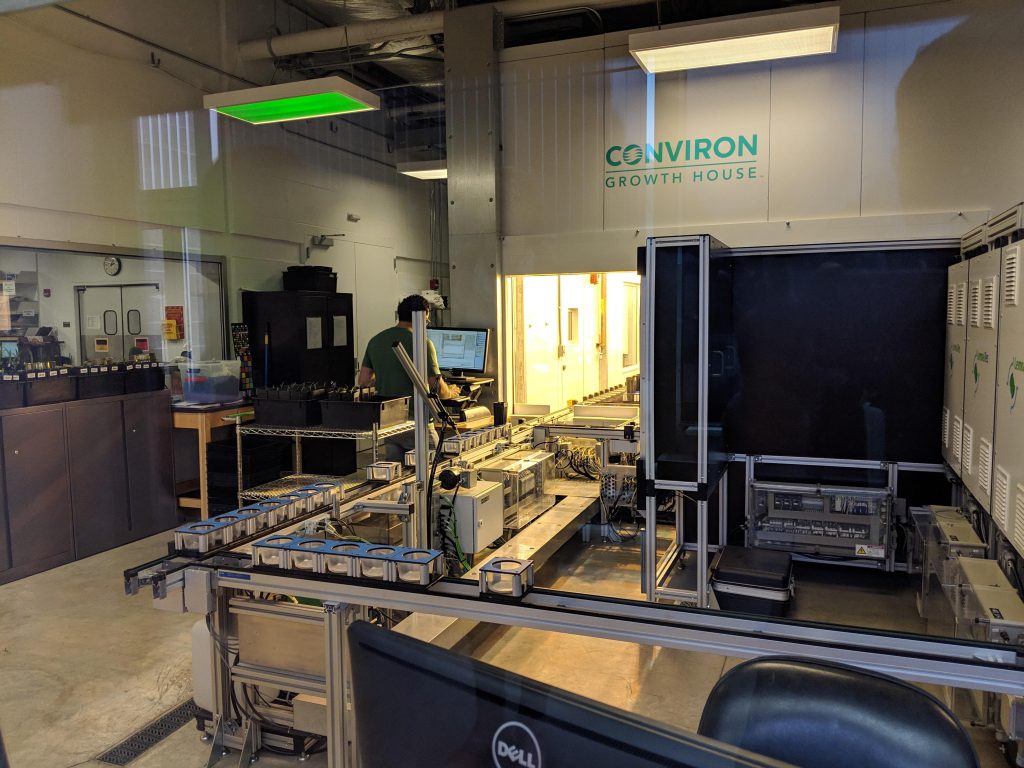 Further exploration of Missouri led us to a local cattle farmer, where we learned more about the local practices, allowing a great comparison to those used in Australia. 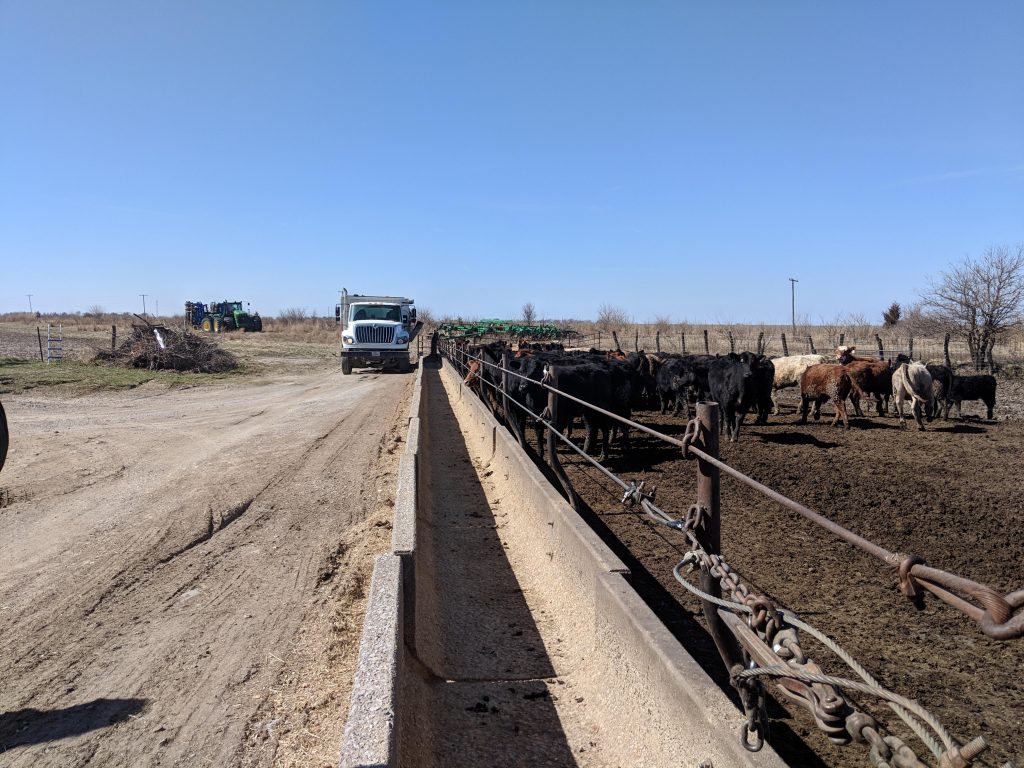 Leaving the cattle enjoying their feed, we turned our attention to the Missouri Bay Research Facility to hear all about soybean. This was especially important for us to get a good understanding of the soybean market and how soybean is grown in the Midwest specifically in regards to the inoculation practices. Associations like this example for Soybean in the US can be compared to our own Research Development Corporations (RDC) which are levy-funded and provide funding support to projects which target key issues for the growers.

In the afternoon we took a brief trip across the state boarder into Kansas visiting the John Deere Ag Marketing Centre in Olathe to heard about their recent innovations and integration of novel technologies. 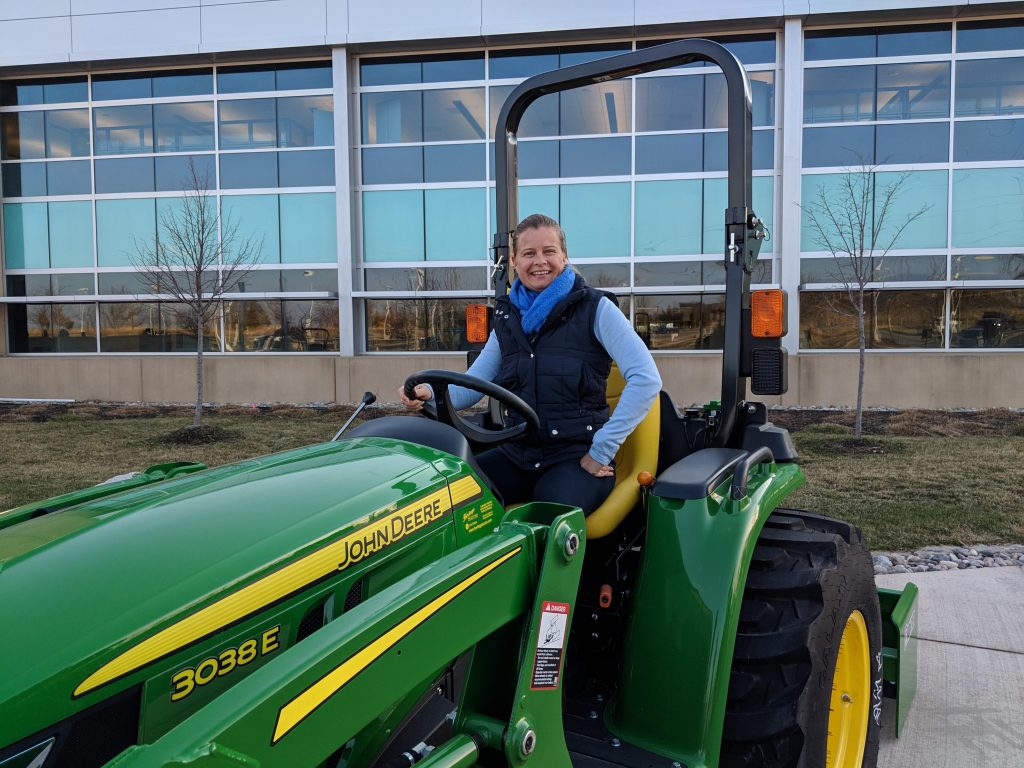 Kansas State University is highly regarded for its agricultural research and renowned as one of the US land-grant universities. With the abundance of expertise in agriculture, participants were matched with researchers for an exchange of thoughts and ideas. This was not only highly informative and invigorating, but further allowed us to establish the first contacts for potential future collaboration with the university. 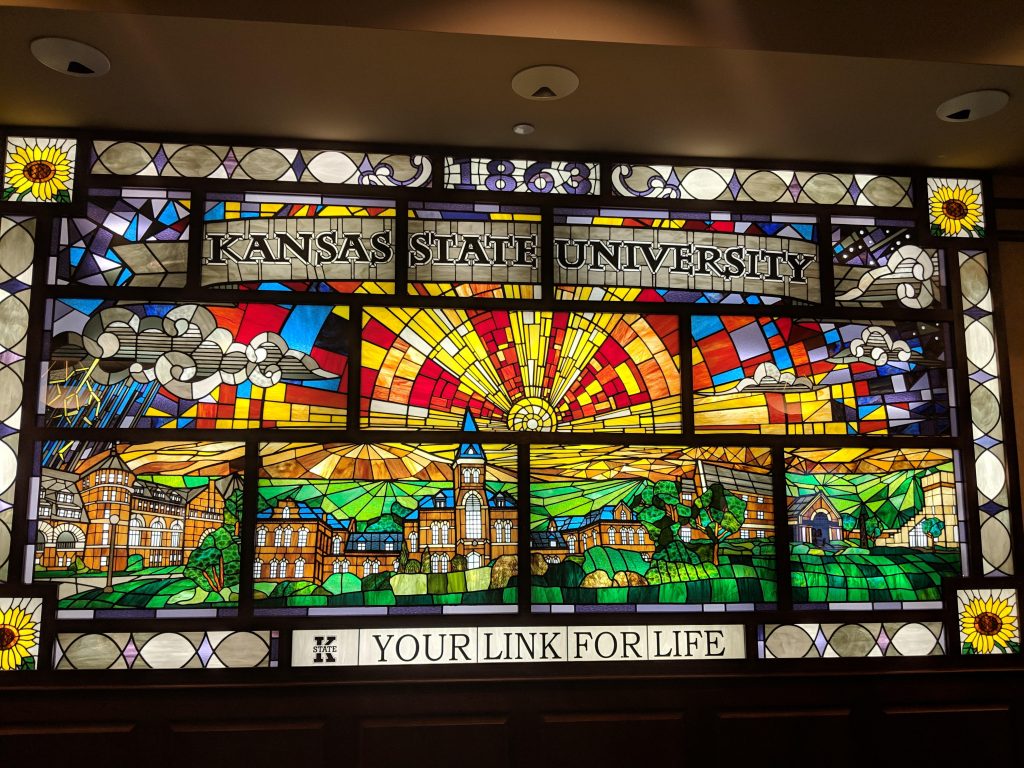 It was interesting to learn that soybean is used in rotation with corn and due to the large amount of fertiliser used in the corn cycle it is unclear what the effects are on the natural nitrogen fixation ability of soybean. There is a belief among farmers that they do not need to inoculate as the high N content in the soil is inhibiting the nitrogen fixation making the investment for inoculation redundant. However, there is no evidence from field or glasshouse studies to support or confirm this believe or elaborate at what exact levels of N in the soil nitrogen fixation in legumes is reduced or inhibited.

The excessive application of artificial N-fertiliser has also been identified to cause pollution with dramatic effects on the waterways and aquafers. With the concern of environmental damage threatening the agricultural industry of the region, the counties and state government are interested in reducing fertiliser usage without compromising yields. MALDI-ID is committed to collaborate with US partners to find solutions that enable a stable soybean production with minimal impact on the environment. A transfer of knowledge from the international market would of course also benefit Australia’s soybean production worth AU$20M in 2019 to grow further.

The Midwest spreads across multiple states that are within driving distance, making it easy to once more cross the state border into Nebraska. The state is the top producer of beef and feedlot cattle and ranked in the top 5 for soybean, kidney bean and pinto bean production. Farming is the biggest industry in the state and contributed 5.7% to the US total economy in 2017. There are around 47,400 farms with an average size of 386ha which cover 91% of the state’s total land area. Again, here soil erosion has caused the loss of the top 12 inches (30cm) of the top soil due to the limited corn/soy rotation and the lack of cover crops during winter. Moreover, the N-contamination load allowed by the US Environmental Protection Agency has been set to 10 ppm and Nebraska has an increasing number of areas going above this level. Therefore, similar to Kansas, efforts are being made in Nebraska to reduce the N-fertilisation use during the corn rotation to reduce runoff into the waterways and facilitate or improve nitrogen fixation in soybean rotation instead. Visiting the University of Nebraska and Valmont facilities provided a valuable insight into smart irrigation systems and the importance of using technology to incorporate appropriate management systems to control water wastage. 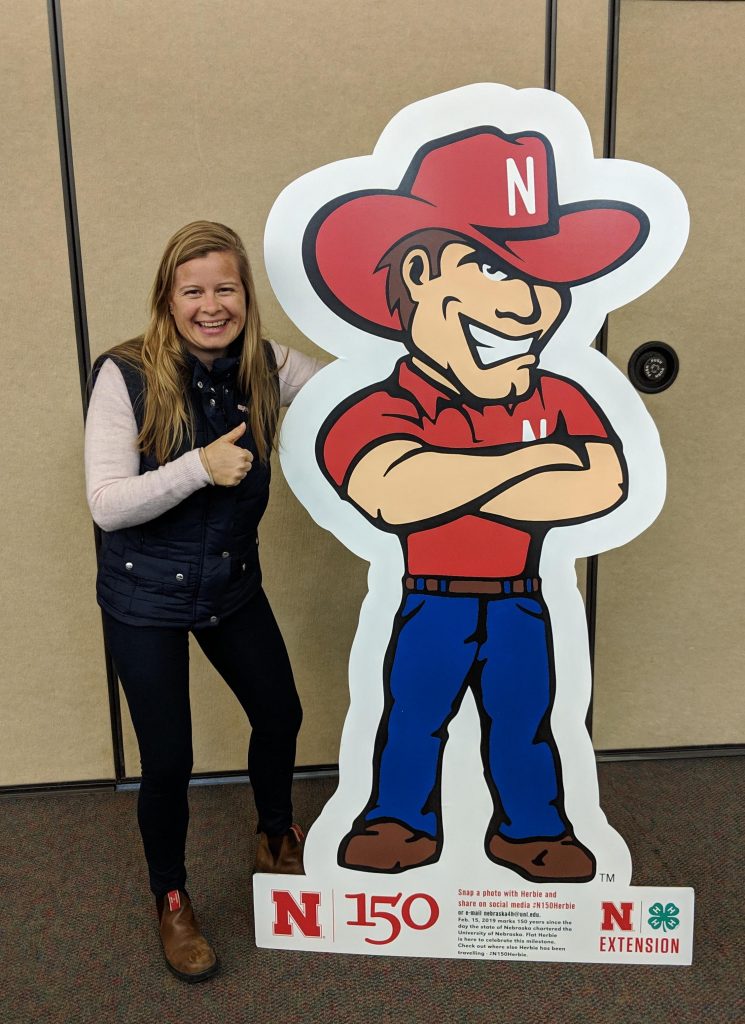 Crossing a state border for the last time into Iowa for our final stop we spent the day at Corteva Agriscience and their Granular team sharing insights with us about legislation and future directions for GMO crops with a focus on innovation integration along the way rounding up the trip that has provided all of us with a wealth of valuable knowledge that we are integrating into our research to benefit our customers.

If you like to hear more news about soybeans and other legume stories from Brazil and Argentina keep an eye on this space over the next few weeks.