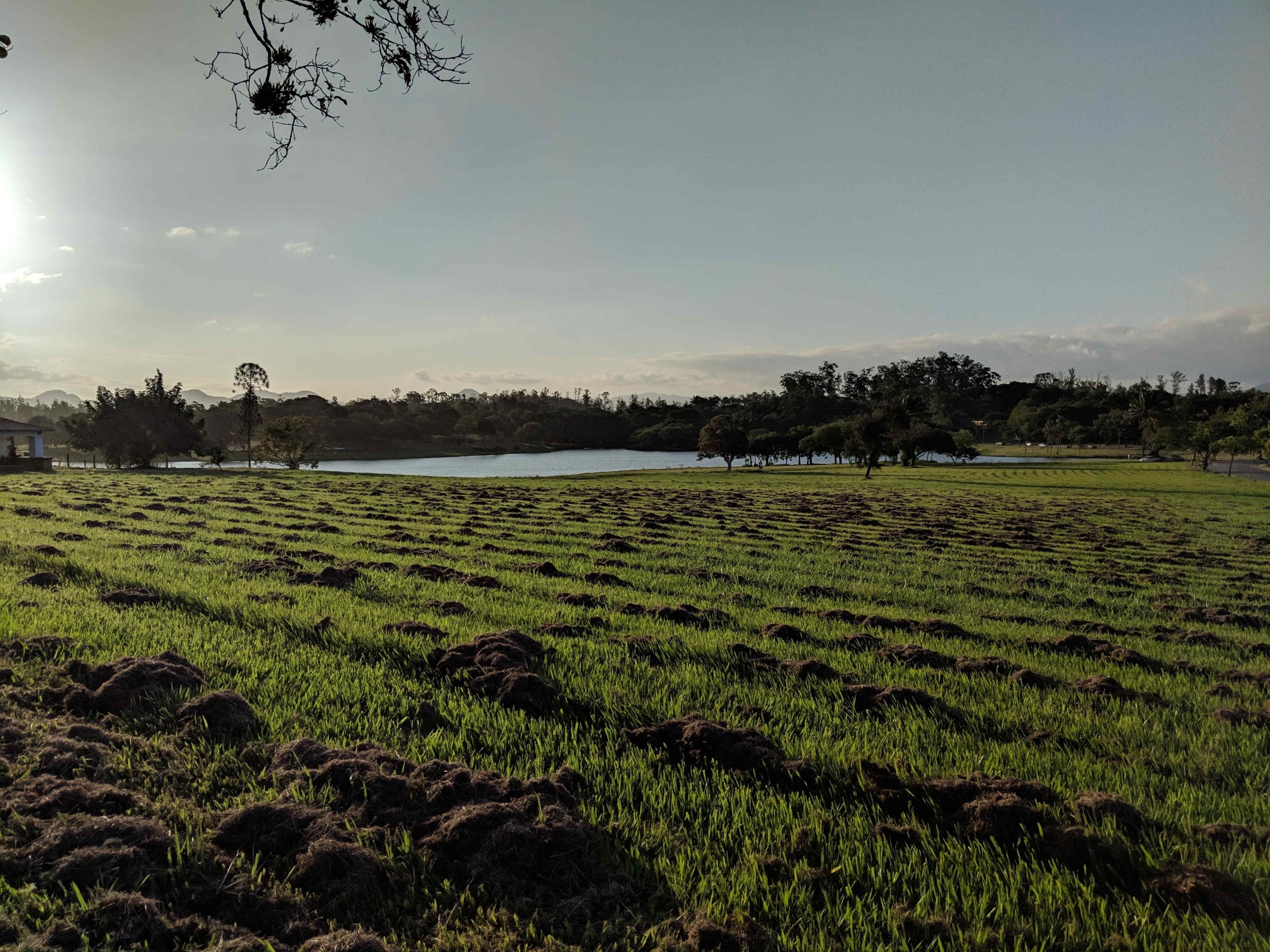 Our third and final visit to the very large and diverse continent of the Americas was Brazil, to learn more about how a nation went from a food importer to one of the largest food exporters over a period of only a few decades.

Brazil has managed to evolve from a food insecure country in the early 70’s into one of the most important food producers and exporters in the world and this has been made possible by a coordinated and well-funded research program. To achieve this significant turnaround, all research efforts were consolidated with the establishment of the Brazilian Agricultural Research Cooperation (EMBRAPA) in 1973. It was founded under the premise to focus research and development on critical nutrient levels, optimum fertilizer sources and efficient application methods. EMBRAPA now consists of a network of 43 R&D centres spread across the country. Until the beginning of the 1970’s Brazil was troubled by low yields and all agricultural production was limited to the South and Southeast of the country. Identified as some of the biggest issues at the time were a lack of knowledge on tropical agriculture that would allow agriculture in the north and a lack of appropriate policies that would facilitate this. Brazil’s first agricultural (r)evolution therefore began with the tropicalisation of soybean (Glycine max) varieties and the development of liming and fertilisation technologies that transformed the poor acidic soil into fertile land. The second significant agricultural (r)evolution arrived with the introduction of the No-Tillage practices in the 1990s as well as better short-cycle soybean varieties that enabled double cropping of soybean and corn (Zea mays), significantly increasing the yield per hectare and year. Progress and change continued to emerge during the 2000’s where work focussed especially on the Cerrado region for the integration of crop, livestock and forestry systems (ICLF), heralded as the third agricultural (r)evolution for Brazil. Planting deep-rooted grasses such as Brachiaria species into soybean or corn fields, either as a cover crop or pasture for cattle during the dry/winter season, has become a viable option adopted successfully on 4.5 million ha throughout the region. The incorporation of these grasses has been shown to increases plant residue adn soil carbon content, provides soil protection during the dry season and contributes to a more biologically active environment. Further on the soils topic and what happens out of sight below the ground; biologicals and especially the introduction of Azospirillum as a plant growth promotor has further enhanced the yield and stress tolerance of the different broad acre crops, making it an interesting technique with considerable potential in other growing regions around the world. The long-standing research effort coordinated by EMBRAPA has resulted in highly efficient inoculants and a thriving inoculant industry that is supported through the strong adaptation of growers across the nation.

To see this in person and meet the people behind the significant ongoing efforts in Brazil, our tour started in Brasilia with a visit to EMBRAPA Cerrados, where we met with the teams of Dr. Fabio Bueno dos Reis Junior and Dr. Ieda Mendes, both passionate about sustainable farming practices. It was fabulous to see and understand the evolution the Cerrado has gone through and how the targeted innovations have resulted not only in yield increases, but also reduced soil erosion and increased carbon sequestration. The Cerrado research facility also holds a bacteria research collection of 1,200 strains of which 70 % alone are specific to soybean and common bean. This incredible repository holds future potential for further inoculant improvements, also beyond the borders of Brazil. 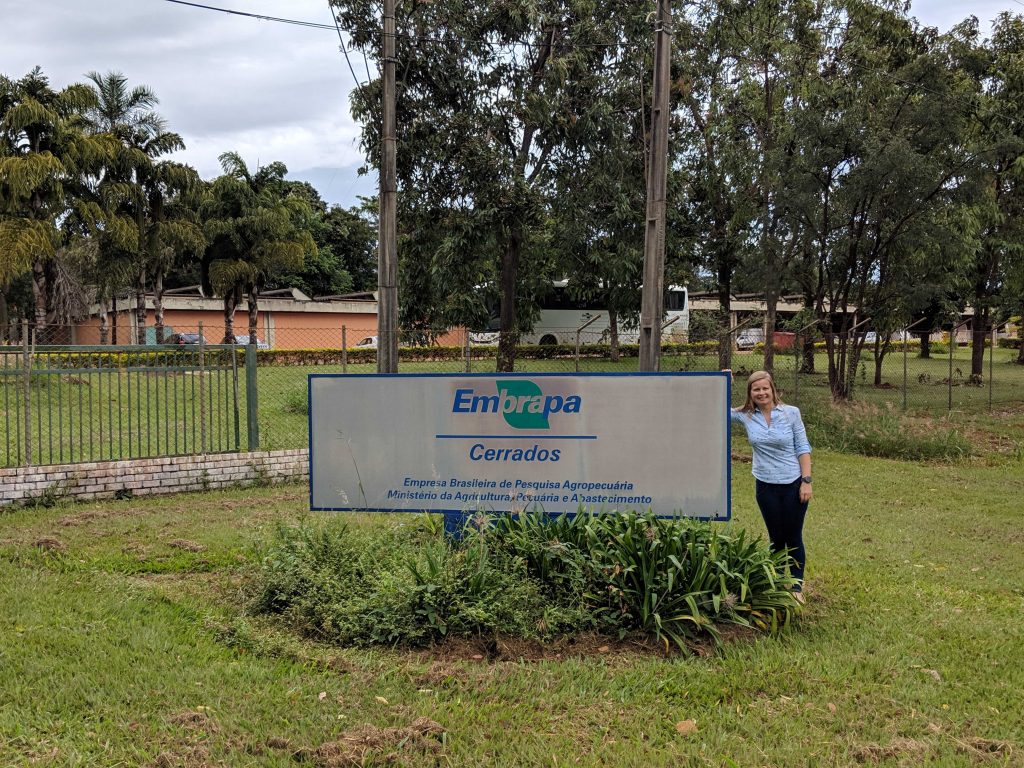 Considering the size of the biologicals market, we made sure to include visits to a range of remarkable and impressive inoculant companies including Total Biotecnologia (now Biotrop), SuperBac, Bayer (Cambé site) and Forquimica. We started in Curitiba where we were shown around the production facilities of Total Biotecnologia, which were established in 2005 and recently acquired by Aqua capital and merged with Biotrop. The multinational research team focuses on the production of an extensive range of biologicals with application for nitrogen fixation, stress resistance, silage stability, plant growth promotion and increased inoculant efficacy. The successful development of highly competitive products has allowed them to reach a 25% market share against a strong national and international competition. Further to its own brands, Total Biotecnologia produces inoculants for other companies in the Brazilian market. The R&D continues to focus on further improving effectiveness and product QC of their products, and they collaborate with EMBRAPA as well as other national and international partners to achieve these goals. 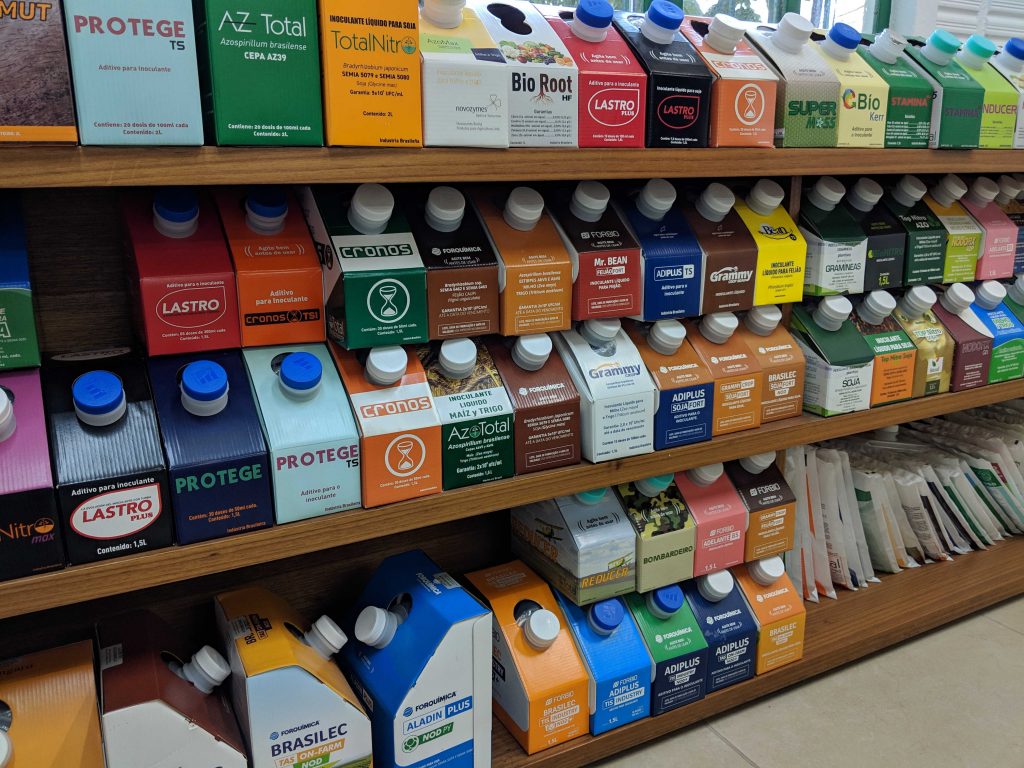 SUPERBAC has been developing and delivering high performance biotechnology solutions for the agriculture, sanitation, oil and gas and consumer goods segments for more than 20 years. They are continuously on the hunt for the true beneficial super-bug, and not to be mistaken for the nuisance that causes great concern for hospitals and doctors. With research and development centres located in Brazil, the United States, Colombia, and Singapore, SUPERBAC is consolidating its position as a leader in bio-innovation.

They produce fertilisers starting from chicken manure that get mixed with plant growth promoting bacteria to increase uptake and effective usage by the plant. In the oil and gas industry they focus on remediation of spillage by using bacteria mixtures, whereas the consumer goods segment is focusing on the removal of undesirable odours in sewerage pipes. There is an increased push into the agricultural market and hence their fermentation laboratory was moved to Londrina, next door to EMBRAPA Soja one of the world leaders of soy research, to focus on new products, optimisation of existing processes, scale-up testing and pilot production testing. SUPERBAC is using the latest in genomics and biochemistry to assist their R&D aims in agriculture, as well as undertaking ground-breaking research in mapping the Brazilian soil microbiome. To remain competitive in the global market, future expansions are planned with an aim to produce their own inoculants on site in Londrina. 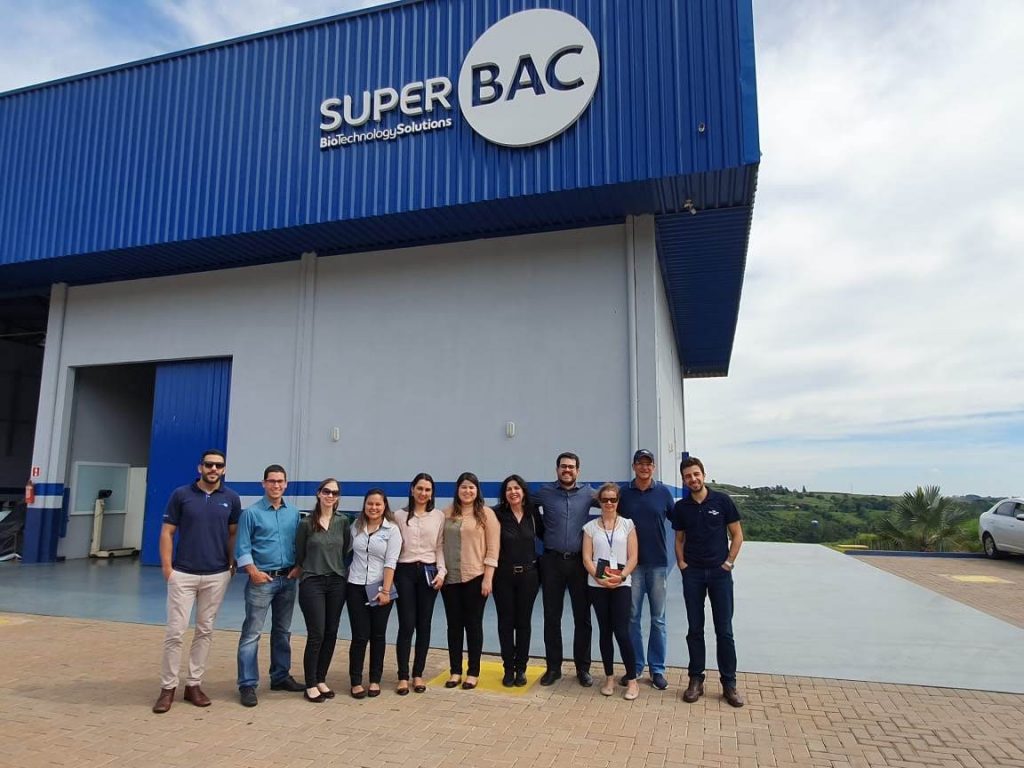 One of the largest global players, Bayer has around 15,000 employees in the Latin American market which generated around A$9B in 2018. We were fortunate to visit their Cambé site neighbouring Londrina, where around 3.4 million doses of liquid inoculant are produced per year. Their research strongly focuses on biologicals, improving seed treatment, nodulation and nitrogen fixation. However, due to the merger with Monsanto the R&D directions are being consolidated and refocussed. The main goal for the Cambé site is to obtain ISO accreditation and increase production efficiency. 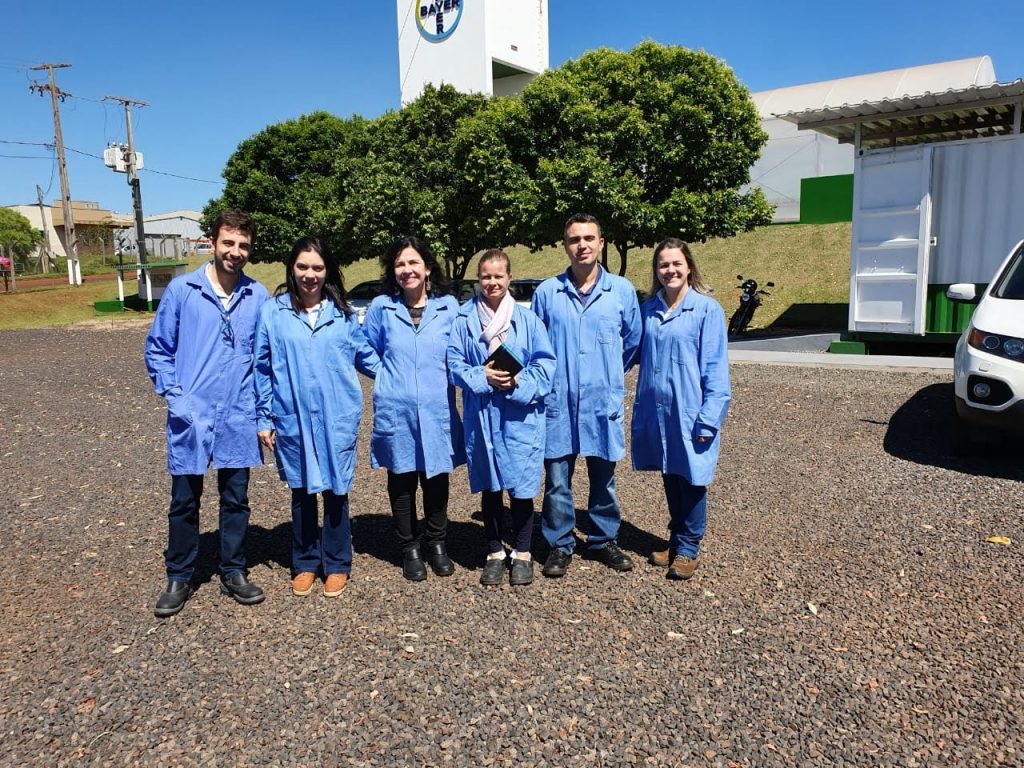 One of the established players in the region is Forquímica founded in 1985 with the main objective of bringing unique liquid inputs and fertilisers to the agricultural market. The success of their work and high economic growth rate together with the favourable market conditions in the following years allowed the diversification of their activities. Therefore, the Forus Group was created to unify the administration, storage and distribution of the manufactured produced by a range of associated companies including Forquímica, Dominus, Domclor, Stevia Natus, Laborfort, Ecoforest, Mademax, For brothers and Transagil. The Forquímica headquarters and production plant are located in the city of Cambira one hour drive south from Londrina, where they are currently establishing their own inoculant production facilities. This will allow them to offer a more personal approach for their customers, by combining the expertise in nutrition and protection into an optimised product portfolio that is designed to work synergistically without interference. 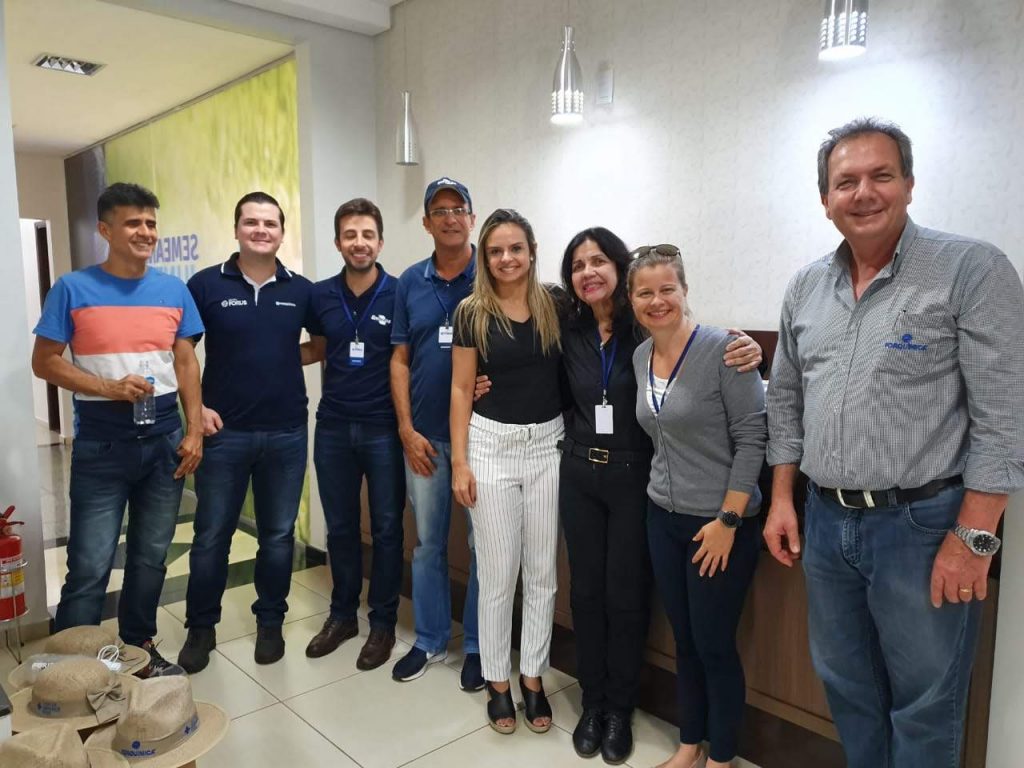 Tracing our route back to Londrina, we caught up with Prof Mariangela Hungria and her team from EMBRAPA Soybean in Londrina. As mentioned above, the contribution to the remarkable evolution of soy agribusiness in Brazil over the last few decades, places the Unit on top of the worldwide list of renowned institutions in the development of technologies for cultivation in tropical regions. Among the long list of its achievements are the development of cultivars adapted to low latitude regions, biological pest control, soil management and conservation techniques. Although mostly known for its work on soybean, the Unit is also responsible for research on sunflower farming for the entire national territory. In addition to this already extensive range of research areas, they are also deeply involved in wheat research developed in partnership with Embrapa Wheat (Passo Fundo – Rio Grande do Sul) and the Paraná Agronomic Institute – IAPAR (Londrina, Paraná). For the best possible integration of multi-crop farming systems, Embrapa Soybean also participates in research activities of other Units, such as Embrapa Maize and Sorghum (Sete Lagoas – Minas Gerais) and Embrapa Rice and Beans (Santo Antônio de Goiás – Goiás) to ensure the best possible outcomes and synergies between the institutional units as well as the crop systems.

The team of Prof Hungria has been at the forefront of inoculant development and improvement both with rhizobia and a range of plant growth promoting bacteria. The unit proudly houses the inoculant mother collection and services the inoculant industry with verified type strains, product QC, field trials, quarantine testing and new product registration.

Incidentally during our time in Londrina, the annual agriculture expo was in full swing showcasing the newest offerings, market trends and latest achievements in national and international agriculture. Given the nature of the expo, it provided us with a great opportunity to see some of the showcased animals and crops including the famous Brazilian coffee as well as engage with distributors servicing the Brazilian, South American and global agricultural market. 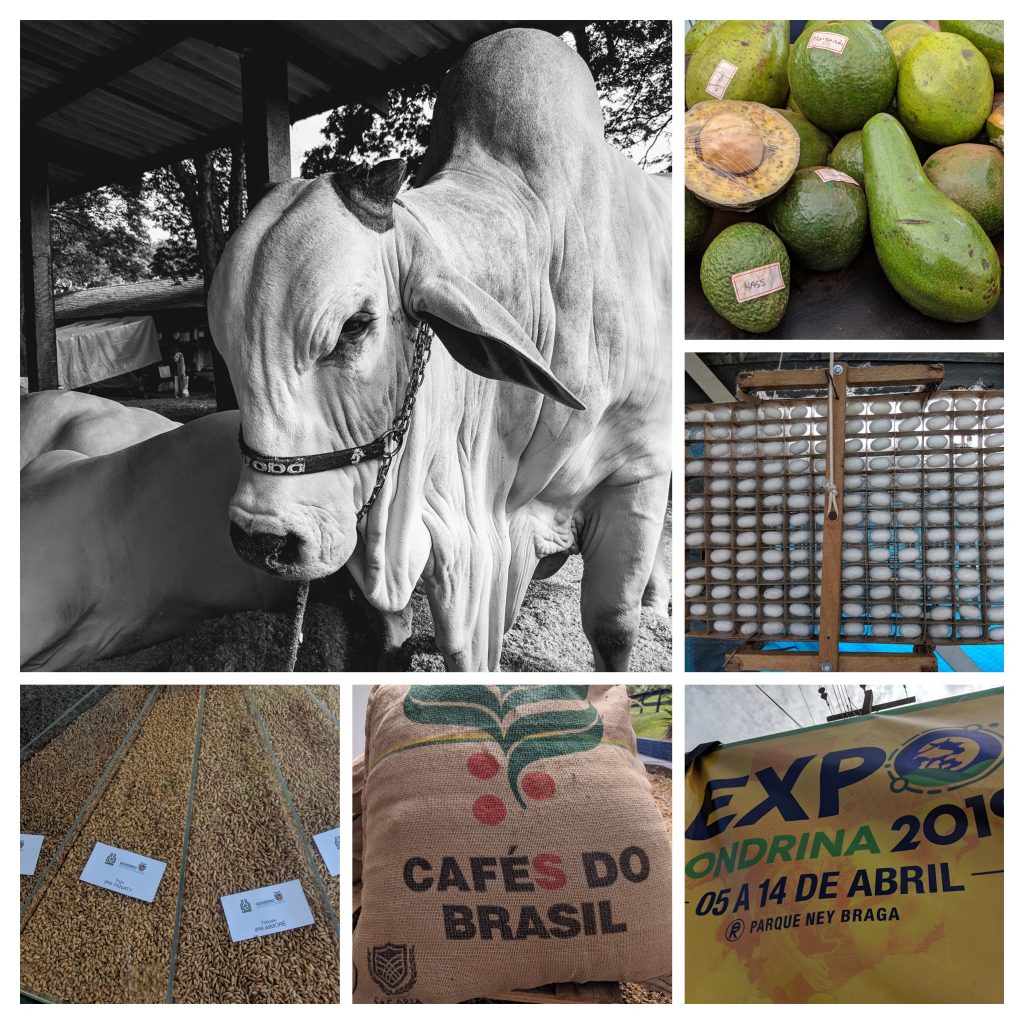 Our final stop lay along the way back to Rio de Janeiro in Seropédica where we met with Prof Jerri Zilli and his team at EMBRAPA Agrobiology. This unit is a decentralized Unit of EMBRAPA and linked to the Ministry of Agriculture, Livestock and Supply (MAPA). It has approximately 150 employees, including researchers, analysts and technicians. It was interesting to learn from Jerry about their main research focus around biological nitrogen fixation, agroecology and organic production, microbiology and biological inputs, recovery of degraded areas utilising molecular genetics and biochemistry. Embrapa Agrobiology also houses the Johanna Döbereiner Biological Resources Center (CRB-JD) named after the Brazilian pioneer in early Azospirillum research and other beneficial soil bacteria, who was a key figure in the rise of Brazil as one of the world soybean farming leaders. The institute named in her honour today houses a wide collection of microorganism cultures, with about 3,700 bacteria and 50 arbuscular mycorrhizal fungi. CRB-JD’s mission is to maintain the microbial germplasm bank with the ambition to continuously enriche its collection through the incorporation of new microorganisms, whether this be via discovery or exchange with other centres around the world. They continue Johanna Döbereiner’s legacy by developing new biological inputs and sharing the knowledge and insights through training and engagement in microbial taxonomy for academia and other professionals in related industries. 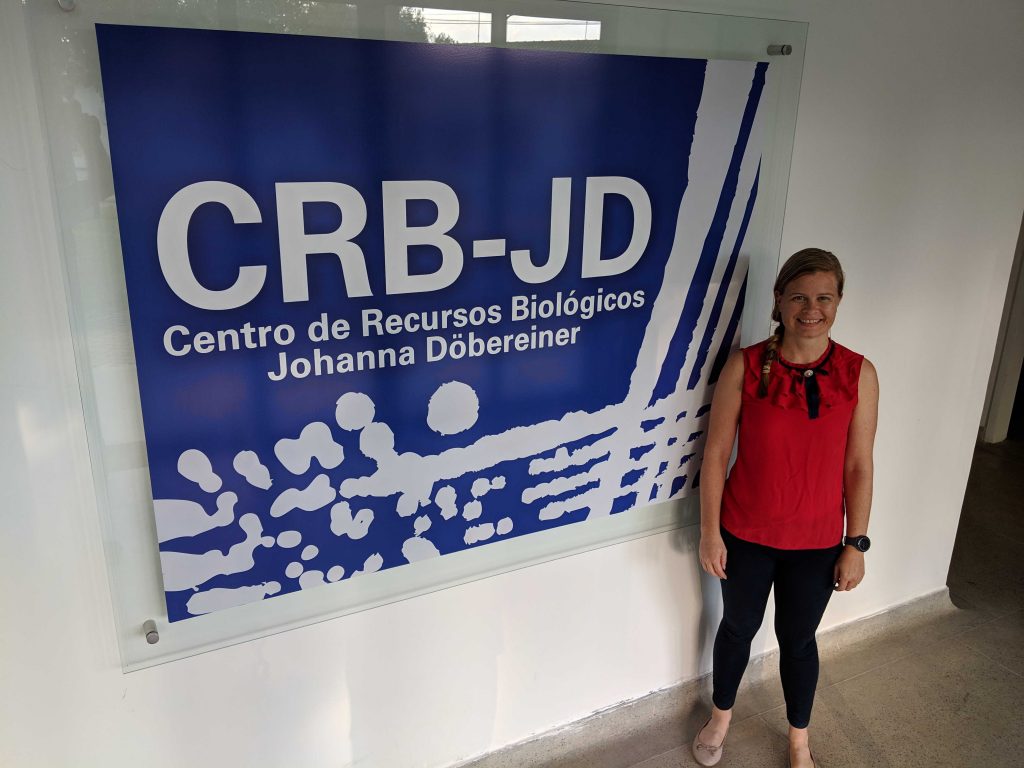 After a long but interesting and highly rewarding trip across many boarders, it was time to return home to Australia and start unravelling the many lose or tangled threads of information and sorting them into neat and manageable coils with which we can continue our own efforts to improve Australian farming.

We believe that there are great opportunities on both sides to learn and benefit from each other and we aim to support our local agriculture industry as well as work towards a sustainable farming future where biologicals will assist in nitrogen fertilisation worldwide.

We would like to sincerely thank the WA Department of Jobs Tourism Science and Innovation for the grant that made this trip possible.

For the next edition of this little mini-series, we plan to share our experience and thoughts from a trip across the ditch, visiting the land of Hobbits, lots and lots of birds of which some are named like fruit and of course a large number of sheep and cows grazing on pastures.

We wish everyone a relaxing and peaceful break and a great start into a hopefully successful 2020.

Best wishes from the MALDI-ID team